MedTech startup Sirius Medical has received CE Mark approval for Sirius Pintuition, a non-radioactive device to localize breast tumors. In 2016 Bram Schermers, then a scientist at NKI, pitched an early concept at the annual Amsterdam Science & Innovation Awards and won first prize! His pitch also caught the attention of seasoned entrepreneur Hubert Martens, whom Schermers met during the event and who would later become co-founder and CEO of Sirius Medical. Four years on, the company is set to launch its debut product in the Netherlands, Germany and the UK in September and several other European countries later this year. 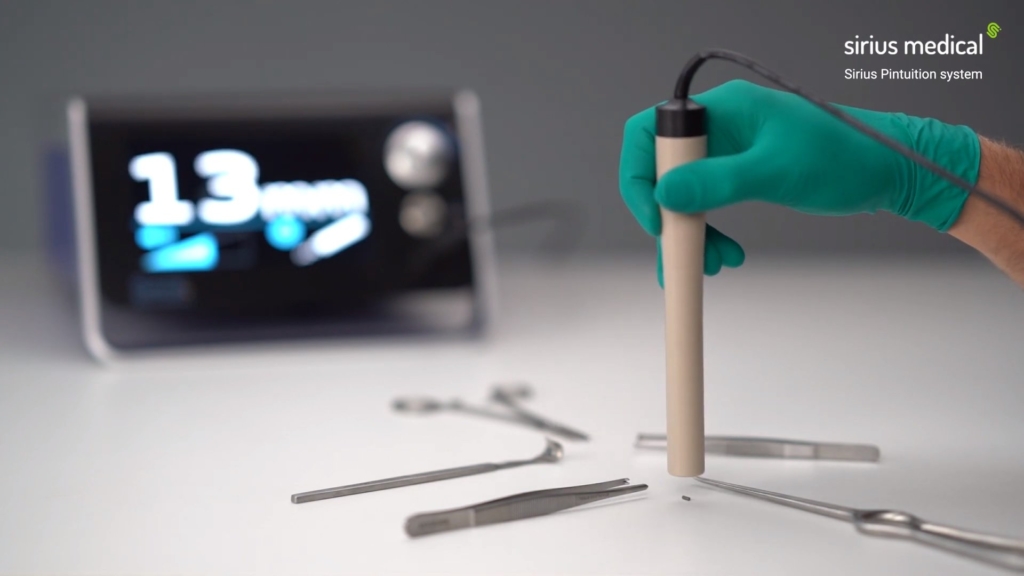 Safe and easy-to-use
The newly acquired CE certification paves the way for Sirius Medical to provide a safer and easier-to-use alternative to commonly-used techniques in tumor removal surgery. With the rapid improvement of breast cancer diagnostics over the past decades, surgeons are facing increasingly challenging procedures as they must localize even smaller and earlier-stage tumors. Until now, surgeons have been using metal anchor wires or radioactive seeds to localize tumors.

“Wire localization is not pleasant for patients and poses logistical challenges because of the required presence of a radiologist on the day of surgery”, says CEO Hubert Martens. “And many hospitals refrain from using radioactive seeds because of the related safety protocols and their impact on efficiency.”

With the launch of the Pintuition device, Sirius Medical aims to revolutionize the way tumors are localized during surgery, using small magnets instead of radioactive seeds. The Sirius Pintuition is an ultra-small device – no larger than a grain of rice – which is implanted in the body prior to surgery. The seed can be placed up to 180 days before the surgery to mark a target within the soft tissue. During surgery, the Sirius Pintuition Probe provides highly accurate, real-time feedback and directional guidance to the marked tissue.

Next steps
Sirius Medical has its roots in the National Cancer Institute (NKI). After winning the AMSIA, clinical scientist Bram Schermers acquired intellectual property of his invention and officially founded Sirius Medical in February 2017. His co-founder Hubert Martens had previously helped set up Sapiens, a successful MedTech spin-off from Philips Medical, and provided a crucial role in developing and growing the company into a commercial business. From his previous experience, Martens knew how to attract funding, build a strong team and create a viable product.

“The most valuable part of participating in the Amsterdam Science & Innovation Awards was meeting Hubert Martens during the networking part of the event”, says Schermers. “There are a lot of mistakes we might have made if it hadn’t been for the fact that we had an experienced CEO on our team very early on”. About 1,5 years ago they started the application procedure for the CE Mark. For the launch of the Pintuition device they have decided to initially limit the market size to be able to control the distribution and gather feedback directly from users in order to make the product even better.