Amsterdam UMC researcher Dr. Przemek Krawczyk has developed FiglinQ: a cloud-based, collaborative platform for analysis, interactive plotting and publishing of research data in smart manuscripts. Earlier this year, Przemek was awarded an IXA Proof of Concept grant to launch FiglinQ, and since then several big milestones have been achieved: In June, the first smart 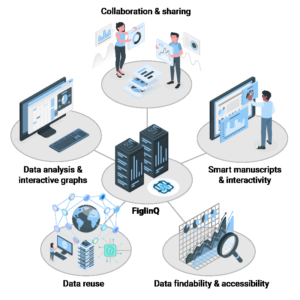 manuscript generated with the use of FiglinQ was published in Nature. Later, FiglinQ received enthusiastic reactions from Elsevier and Springer-Nature. In December 2021, the spin-off company FiglinQ BV was incorporated. And shortly after the incorporation, an NWO Take Off Phase II loan of €250.000 was granted to FiglinQ BV to further develop and improve several key features of the platform, generate stable revenue streams and raise capital for further growth.

Anya Biotech, representing Amsterdam UMC, has won the second edition of the Proefdiervrij Venture Challenge on the 22nd of April 2022. Their winning innovation is based on research from the Department of Medical Biology at the AMC. The team takes home €25.000, – in prize money to kick-start their venture based on human heart models […]

Sem Vijverberg – PhD Candidate at Vrije Universiteit Amsterdam – and University of Amsterdam PostDoc researcher Tijmen Bakker have been selected as participants in the Faculty of Impact, and will be taking part in an intensive two year program where ten ambitious scientists work with each other and with a selection of experts to conquer […]