Anya Biotech, representing Amsterdam UMC, has won the second edition of the Proefdiervrij Venture Challenge on the 22nd of April 2022. Their winning innovation is based on research from the Department of Medical Biology at the AMC. The team takes home €25.000, – in prize money to kick-start their venture based on human heart models to treat cardiac disease.

The Anya Biotech team, consisting of Harsha Devalla, Marc Roelofs and Sander van Leeuwe, participated in the second edition of the Proefdiervrij Venture Challenge. In this bootcamp program, 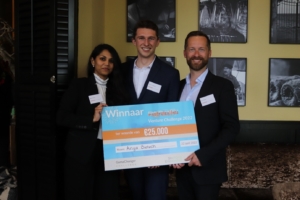 the participating teams have been guided in the process of translating their scientific breakthrough into a solid business case. This specific version of the Venture Challenge was organised by Proefdiervrij, a foundation idealizing a future without animal testing. The participating teams have brought forward innovations contributing to this cause. In the final, the teams presented in front of an expert jury consisting of Geert-Jan Mulder, Rianne Ellenbroek, Giel Hendriks, Jos Joore and Susan Janssen. The final presentations and subsequent award ceremony took place at Pathé Buitenhof in Den Haag.

The vision of Anya Biotech is to dramatically improve the quality of life of patients suffering from cardiac arrhythmias. They will develop therapies for cardiac arrhythmias such as Atrial Fibrillation and Pacemaker Dysfunction. The cardiac models of Anya Biotech are based on human stem cells, and they mimic the human heart more accurately than the models that are currently used for drug discovery (e.g. animal models). This significantly improves their chances of identifying effective drugs for cardiac arrhythmias, which are currently not effectively treatable.