Dr. Ronald van Steden enters into a partnership with the Dutch police. Together they are committed to guide and monitor the new position of ‘director care and safety’ (regisseur zorg en veiligheid) in Amsterdam.

Dr. Ronald van Steden, Associate Professor of Public Administration at the Vrije Universiteit Amsterdam and Senior Researcher at the NSCR, has been working successfully with the police for a long time, conducting research that is of value to the police and for academia. When the police introduced a new care and safety director in order to stimulate collaboration with healthcare agencies, they asked Van Steden for support.

Van Steden: “they asked me if I would like to do research on care and safety directors, especially because my research has a practical approach. This is beneficial to the police.” He accepted the offer. “Healthcare and public safety are also of scholarly interested, so I think I can write scientific articles about this topic as well,” Van Steden says. “And I think the theme is fascinating, because, as a social scientist, you can contribute to solving care and safety problems in more humane ways.” 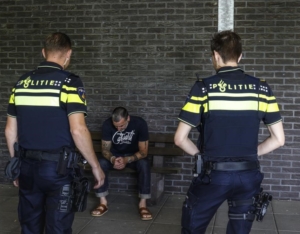 Police work relates a lot to vulnerable people and social groups who challenge the public order, such as emotionally disturbed persons, families facing domestic violence, and criminal youth. Healthcare agencies often work with the same kind of groups. This is why the Dutch police and health agencies should work together more closely. The new police directors care and safety will supervise the integral cooperation between care and policing agencies.

Over the next three years, Van Steden will monitor whether the new directors will succeed in realising better cooperation between the police and many healthcare partners. Van Steden: “it would be great if the position would be more solid in three years, that the director can do their job well and preferably solve or diminish social problems.”

Intertwining research and society
Van Steden: “I sometimes think that the university should do better in contributing to knowledge which is of relevance for society. We talk a lot about dissemination and social impact. It would be great if the university would stimulate this kind of research a bit more.”

How does Van Steden intertwine his research with police practice? “You have to invest in a network. Step away from your desk, try to understand the subject, in this case police work, and how you, as a researcher, can have added value,” explains Van Steden. “Secondly, I start designing a study with the police from the beginning, so you determine the direction together before the study has even started. This creates a good integration of knowledge.”

“I also link scientific researchers to researchers within the police organisation. We do our research independently, but in collaborating closely, also stimulate practicality and social impact.” Van Steden’s last suggestion would be to “make good agreements about sharing and managing data so you can publish it. In addition to being of added value to the police, I also wish to produce some publications.”

Support of IXA
“You have to push and pull a bit within the university to combine the interests of academic research and society,” explains Van Steden. “That’s why I am really happy with IXA.”

IXA supported Van Steden in setting up his collaboration with the police. IXA’s Business Developer Diane Schöller accompanied Van Steden when investigating which forms of cooperation between the university and the police were possible. Together they prepared and held discussions with colleagues in the Amsterdam police force. Schöller: “It was a pleasant collaboration, especially because Ronald saw the added value of such a collaboration as self-evident.”