Industrial and organizational psychologist Elisabeth Jäckel, UvA PhD candidate with the section Leadership & Management at Economics & Business, has won the UvA preliminary round of the international Three Minute Thesis (3MT®) pitch competition. In the 3MT competition, PhD candidates pitch their research in three-minute videos aimed at an audience of non-scientists. Elisabeth will represent the UvA this autumn at the European final. 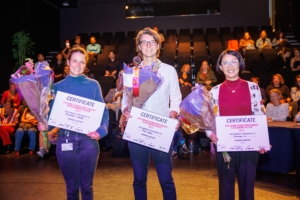 The jury also chose two runners-up: chemist Tom Keijer from the Faculty of Science/ Van ‘t Hoff Institute for Molecular Sciences and art historian Weixuan Li from the Faculty of Humanities/ Amsterdam School of Historical Studies. They conduct research into artificial photosynthesis and the lives of 17th-century painters and their clientele in Amsterdam, respectively. In addition to an honorable mention, the runners-up will both receive €500. The jury indicated that they were impressed by the high quality of the pitches from all of the participants.

Springboard
The 3MT competition has proved to be a springboard for previous UvA winners. Last year’s winner, Yoni Schirris of the Faculty of Science, was subsequently invited to give a workshop at the Intelligent Health Summit Amsterdam 2021. His professionally shot pitch video also helped him secure a position as a guest researcher at a leading research group in his field of expertise in Germany.

900 universities
The 3MT® competition originally started at the University of Queensland (Australia) and has since grown into an international competition with participants from 900 universities across 85 countries. Elisabeth Jäckel will compete in the autumn with the winners from other European countries. This European final is organised by Universitas 21 (U21), the international network of research-intensive universities of which the UvA is a member. The European winner will eventually take part in the grand global final between the continents in Spring 2023.

Photosynthetic, a VU tech start-up developing 3D lithography technology and founded by postdoctoral researcher and entrepreneur Alexander Kostenko, has not been sitting still in the past years.