On the 17th of October, 70 KTO colleagues from the different universities of the Netherlands came together to participate in the annual KTO Masterclass as part of CES Unveiled at the Beurs van Berlage, hosted by IXA. 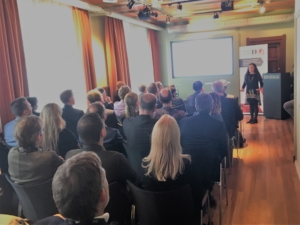 Gigi Wang kicked of the day with an energizing presentation. Gigi runs the MG-Team, which delivers global entrepreneurship and innovation training programs. With little jokes in between, she demonstrated how she teaches entrepreneurship and showed the public the importance of mindsets of innovators. While often referencing to her own journey, she illustrated how mindsets can be altered into a specific ‘innovation mindset’ through experience and coaching.

Followed was an presentation of Andy Walsh, Director Academic Liaison at GSK in the UK, who portrayed the perspective of global company GSK on collaborating with researchers. He explained the strong need of GSK on collaborating with outside partners and described the terms of condition on partnership. He ended with clear guidelines for the audiences on the do’s and don’ts for supporting the realization of future collaboration between researchers and global companies.

Frans Feldberg, Full Professor of Data-Driven Business Innovation/Associate Dean Valorization at Vrije Universiteit Amsterdam, took floor next. Like a professor he quizzed the audience on the definition of impact, thereby demonstrating that it is hard to grasp. He argued that academia can create impact by efficiently solving the challenges society faces. Frans Feldberg demonstrated vividly that when researches are analyzing their passion, they have to connect with society, find a collaboration which is valuable for all partners with the help of KTO’s, while staying close to their identity.

Hereafter, a panel discussion was set up between the speakers mentioned above and Olivier Heyning, co-founder and CEO of LUMICKS. Different interesting subjects were addressed like the importance of the independence of the research institutes, the arrangement of IP and shares between the institute and the start-up and the models of collaboration between the institutes and industry. 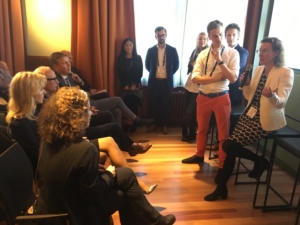 Mirjam van Praag, president of the Executive Board of the VU, gave a motivating talk on the importance of researchers collaborating with businesses. Being professor of Entrepreneurship at Copenhagen Business School and one of the founders of Amsterdam Center of Entrepreneurship (ACE), she has a warm heart for entrepreneurship. Her talk was followed by Mona Keijzer, State Secretary for Economic Affairs and Climate Policy, who is just as enthusiastic about collaborations between researchers and businesses. She encouraged women and men from universities and businesses to unite and bring forward new innovations together.

All in all was it an inspiring and informative masterclass at the Beurs van Berlage. We are looking forward to next year’s edition on Thursday 23 April 2020 at University Groningen!