Photosynthetic, a VU tech start-up developing 3D lithography technology and founded by postdoctoral researcher and entrepreneur Alexander Kostenko, has not been sitting still in the past years. After starting up in the VU Demonstrator Lab, being a finalist in the Amsterdam Science & Innovation Awards and more, the start-up now received a Eurostars grant and won the Formnext Start-Up Challenge.

Photosynthetic
Photosynthetic is a young VU tech start up founded in 2018 in Amsterdam, developing a technology that can be seen as a very fast 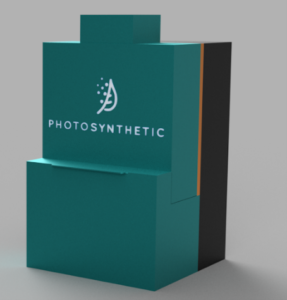 3D printer that works at the microscale and that has the potential to become the fastest and, at the same time, the most reliable 3D printing technology of the future. The technology has been also recently explained in an easy to grasp manner by the CEO of the company here.

Eurostarts Grant
The Eurostars grant is a grant of €500k for their project – working on microfabrication for a novel drug delivery system– which was ranked #11 in Europe, #1 in the United Kingdom and #8 in the Netherlands. Eurostars is a European innovation program and an initiative of EUREKA and the European Commission, and helps (small) companies carry out market-oriented technological development by providing financial support to projects through the national government of each participating country.

Formnext Start-Up Challenge
With 3D printing constantly evolving, the Formnext Start-Up Challenge is part of Europe’s leading trade show within the Additive Manufacturing field, Formnext – held annually in Frankfurt. Innovative 3D printing companies that had been trading for less than five years were invited to submit their applications for the accolade, decided by a panel of industry professionals. Winners were given the opportunity to live pitch to industry experts and investors during the show, show their technology in the start-up area, access business coaching from a jury panel member and receive a company profile from 3D Printing Industry.

What is next?
According to an interview that CEO and founder Dr. Kostenko had with 3Dnatives at Formnext, Photosynthetic will be working towards a shift from prototype to product: “We would like to raise funds to turn our lab-based prototype into a serially-produced MVP in 2023. Initially, we are starting to produce the first printed structures in-house as a service for private and public R&D groups, developing our customer leads and increasing the visibility of the technology. In 2024, we want to start selling serially produced instruments to academic and industrial customers. After that, we will focus on increasing the throughput of the printing process, which will enable the serial production of microstructures.”

Entrepreneurial journey
After a successful run in the Demonstrator Lab, the company moved to the Amsterdam Venture Studios. From there, they encountered many more successes. For example, in 2020, they received a loan from Innovatiefonds Noord-Holland, they were part of the 10 most innovative funded companies and also present at the international Micro Nano Conference 2020. In 2023, they are invited to give a talk at Photonics West Conference taking place in San Francisco.

In the 2022 autumn round of the NWO Take-off Grant, six Amsterdam projects, developed at VU Amsterdam and Amsterdam UMC, have been awarded a Take-off grant. With this Take-off grant, academic and innovative starters can investigate whether their science-based innovative ideas are feasible and commercially applicable. They can also explore the possibility of starting a […]