Every language contains riddles and secrets, currently there are seven thousand+ known languages. A treasure trove of colourful, curious and enigmatic stories. Every language tells a story about and gives a picture of the culture and the people that speak or have spoken this language. And every language is full of riddles and secrets that language users have inherited from previous generations. Thanks to the efforts of many linguists and language enthusiasts, some of these mysteries have been solved: the Maya script has been deciphered and the relationship between the 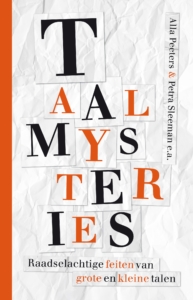 Indo-European languages ​​has been mapped. Other secrets are still waiting to be revealed. Was there ever a primal language? Why is there such a huge variety of languages? And what happens in our heads when we learn a language? Taalmysteries examines: the origin of language: what was there in the beginning? The question whether there is a universal sign language, whether it is possible to count all words in a language, why the d/t rule is so difficult in Dutch. But also why compliments can backfire and why some slips of the tongue make sense. In short, a book for the summer holidays that will keep your curious brain busy.

The book with large and small riddles about large and small languages ​​was written by language researchers and language teachers from the University of Amsterdam under the supervision of UvA Humanities Scholars Alla Peeters-Podgaevskaja and Petra Sleeman.

To enable the development and publication of this book, IXA-UvA has established a partnership with publisher Lias, in which IXA-UvA has used its expertise in business development, negotiations and contract formation. The book Language Mysteries Intensive has also received financial contributions from the UvA Valorisation Fund, Amsterdam University Fund and the Amsterdam Center for Language and Communication Institute (ACLC).

Sem Vijverberg – PhD Candidate at Vrije Universiteit Amsterdam – and University of Amsterdam PostDoc researcher Tijmen Bakker have been selected as participants in the Faculty of Impact, and will be taking part in an intensive two year program where ten ambitious scientists work with each other and with a selection of experts to conquer […]

Anya Biotech, representing Amsterdam UMC, has won the second edition of the Proefdiervrij Venture Challenge on the 22nd of April 2022. Their winning innovation is based on research from the Department of Medical Biology at the AMC. The team takes home €25.000, – in prize money to kick-start their venture based on human heart models […]