What are the first steps when beginning a start-up? 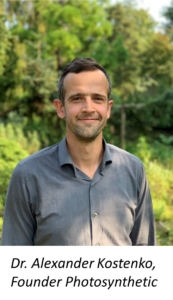 a company is “really hard,” explains Alexander Kostenko with a smile. Alexander found his start-up Photosynthetic in 2019 so he could build high-end 3D printers that make micron-sized objects really fast.

In the beginning “you have no idea how setting up a start-up works and you have to solve all kinds of problems; finding money and people, organising and managing your company and studying the market and talking to potential customers.” Yet, Alexander wouldn’t want to do anything else, as it is his dream to “have a team of researchers who do something completely new with the purpose of making a real product and making it work.”

The academic pre-incubator at VU Demonstrator Lab gave Alexander for example “a chance” to explore if his idea for a 3D printer could work. “Demonstrator lab gives you the space to come in and have a desk where you can assemble something with some tools”, says Alexander. “Without Demonstrator Lab we wouldn’t have been able to do anything.”

Alexander also joined ACE, the incubator of the Amsterdam knowledge institutes. “ACE is a really good crash course for scientists that never read any kind of literature about how to become an entrepreneur or how to start a business,” notes Alexander. “They will connect you to experts and there is a chance one of those experts proposes to become your partner. They definitely help you to start growing your network.”

Currently, Photosynthetic is based at the Amsterdam Venture Studios (AVS) at the Vrije Universiteit Amsterdam. AVS provides, among other things, work spaces and research facilities. “At AVS, we pay way less than, for instance, what we would have paid in the Science Park campus. If we would have paid the market price for a lab space in Amsterdam, we would just not be able to afford it. So I think, unless such organizations exist, you just could not afford to start, even if you have a great idea.”

Be persistent, but flexible
When you set up a company as a researcher, you have to accept that you cannot predict how your journey will unfold. “My learning is that you run into all these unexpected problems,” says Alexander. “You have to be stubborn to not be stopped by that. Gradually you will solve the problems that occur.”

In the first year, Alexander ran into a major obstacle when he was patenting his idea for a high-speed 3D printer. He discovered that two prominent research groups were independently patenting ideas for a similar kind of 3D printer. Alexander was “really upset for a day or two.” Yet, he did not let himself be deterred and decided to alter his idea.

Instead of focussing on making a 3D printer that was really fast, he started working on a 3D printer that could make very small objects. Eventually, Alexanders new idea turned out to have a greater market potential than his original idea.

Take your chance
What last advice does Alexander have for academics that are thinking about creating a start-up? “Don’t think too much about the uncertainties,” says Alexander laughing. “Be foolish enough to start!”

If you think about starting your own company, if you have any more questions or if you would like to know more about Demonstrator Lab, ACE or AVS, please contact us.

Experiencing the AmSIA as a finalist

Biobanks contain valuable information on the donor of the sample. Access to these collections can be crucial for companies developing novel diagnostics or therapeutics.

A ‘pearl’ of an idea provides unexpected business opportunities

About three years ago orthopaedic surgeon Olivier Temmerman approached the Physics and Medical Technology (FMT) department of VUmc. He had an idea to improve the surgical chisel for removing old cementing layers during hip prosthesis revisions. It was ‘a real pearl’ according to Micha Paalman, head of the development group at FMT. “Olivier had worked […]